By The Whiz CellsDecember 19, 2019No Comments

A cell phone battery that doesn’t hold its charge can be a frustrating experience. You’ll always need to have a charger close by to keep it from dying. You can prevent this by knowing more about how cell phone batteries work and how to maintain them. We’ll cover a lot of information about cell phone and smartphone batteries that can help you make better buying choices and handle your phone more efficiently.

To understand the needs of your battery, you need to know what kind of battery you’re using. Generally, there are four different types of batteries used in cell phones:

As NiCds and NiMH batteries are out-of-date, it’s likely that you aren’t using one in your cell phone anymore. Unless you’re using a very old model, your phone has a LiPo or Li-ion battery.

To figure out whether you’re using LiPo or Li-ion batteries, you can often simply look at the label on the battery itself. If you can’t find the label or if it has been removed, you can find the info in the user manual.

After you’ve figured out which battery you have, you’ll have a better idea of what effect it will have on your device.

There is an organic solvent between the two electrodes where the electrolyte is stored. To keep the battery in one piece, a metal case holds it together tightly. As a safety precaution, these batteries also feature a protection circuit that regulates the battery levels and voltage within safe limits.

Li-ion batteries provide high energy density. Additionally, these batteries have a long-lasting shelf life and are easily switched out, making them user-replaceable.

Though the batteries have many benefits, they do come with disadvantages. They generally have a higher weight, making the phone heavier. The phone’s protection circuit often increases the costs of the battery as well. Compared to LiPo batteries, Li-ion batteries have a high self-discharge level. Additionally, they are usually available in a rectangular shape, which can be problematic for uniquely designed phones.

LiPo batteries came after Li-ion batteries. They are very similar in terms of their components, but they do have a difference in their separator, which is the material between the electrodes where ions move. In a LiPo battery, the separator is a microporous polymer covered with an electrolytic gel.

These batteries are growing in popularity for several reasons. For one, their self-discharge level is quite low, and their weight is significantly lower than Li-ion batteries. These batteries also can come in a variety of shapes.

Despite their benefits, the batteries do have some negatives to them. LiPo batteries have a lower energy density and can be more expensive. In comparison to the shelf life of Li-ion batteries, their shelf life is noticeably shorter. Users cannot replace these batteries. 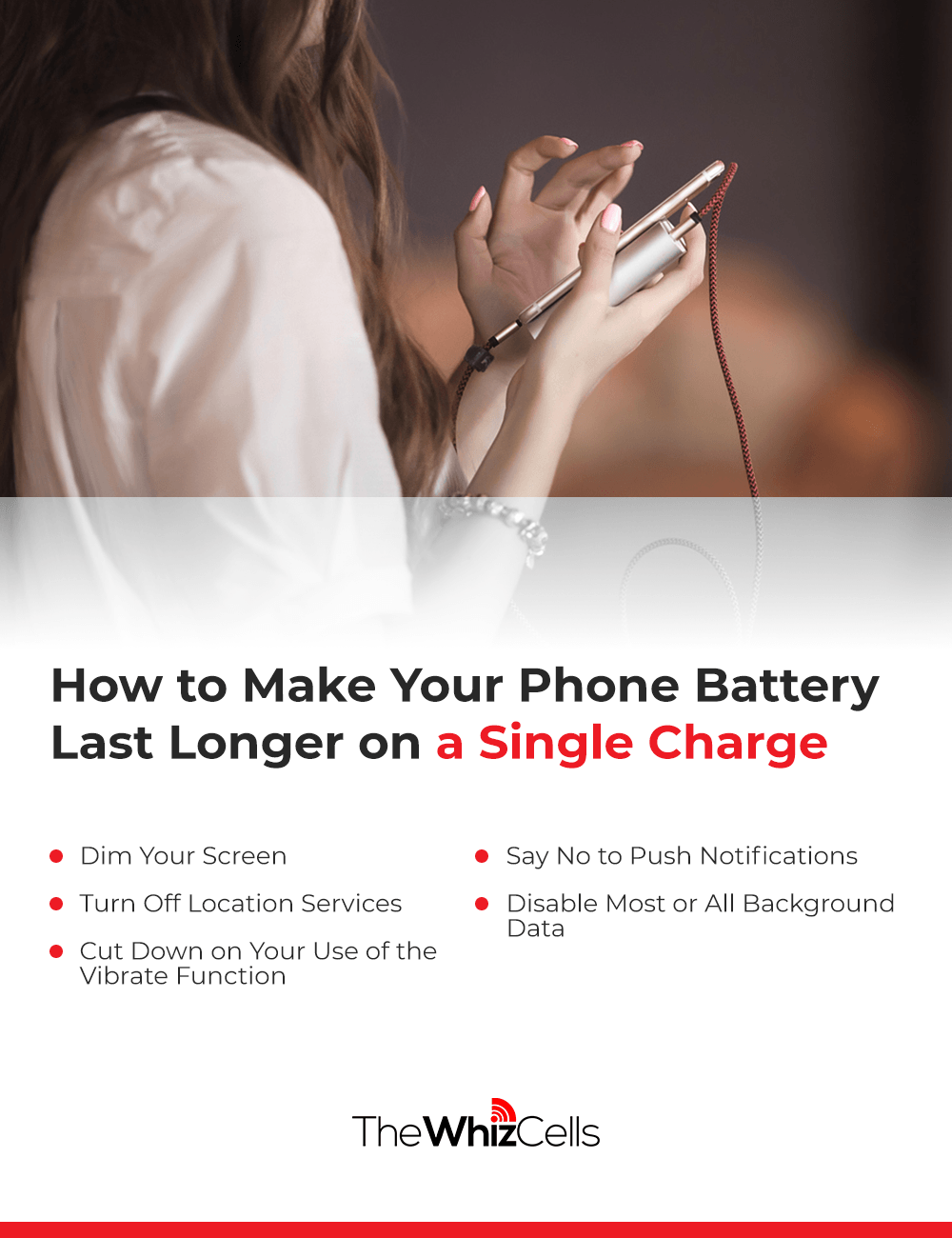 If you’re wondering how to extend the life of your phone throughout the day, you can make several changes whether you have an iPhone or an Android. Below are some of the main options available to users:

3. Cut Down on Your Use of the Vibrate Function

While many have probably had the vibrate function on their phone on since they first took it out of the box, it’s wise to put the phone on ring occasionally. While it might not be obvious, a ringtone takes up less battery than a vibration. So, when you don’t need to have your phone on vibrate, turn on your ring tone or simply set it to silent mode if you don’t need to hear it at all.

4. Say No to Push Notifications

5. Disable Most or All Background Data

Background data can be a hidden source of battery drain on your device. Apps will continuously run even if you don’t have them on, taking up your phone’s bandwidth. This kind of drain due to background data is especially impacted by social media and email apps on your phone. In your settings, you can turn off all background data, or you can choose only to have a few choice apps running in the background. Whatever you select, it’ll use less battery.

How to Make Your Phone Battery Live Longer

If you want to improve your cell phone battery life beyond keeping your daily battery use low, try these methods for increasing how long your phone’s battery will last in the long term. Here are some of the main tips to extend your battery life:

To make sure you get the most out of your battery, you want to limit how often the battery discharges completely. While some might think it’s best to let the battery get down to 0% before charging it again, any phone battery charging guide will tell you that waiting this long could actually harm the battery. Instead of waiting, always keep your phone partially charged, restoring it to 100% battery if it starts to get too low.

Keeping your phone out of the heat is one of those long term actions you can take to make sure that the phone doesn’t overheat and become damaged. For example, direct sunlight can take phones over their 113 Fahrenheit limit. If the phone is regularly in these conditions, it will often degrade faster, reducing the amount of charge it can hold.

To protect your phone, keep it out of direct sunlight. This is especially important in the summer, as surface temperatures can easily reach 158 degrees. Leaving it in these conditions for an extended period will lead to your battery losing its charge capacity faster.

Though it’s tempting to stockpile apps that you might use in the future, it’s better to keep your apps from piling up. Having many useful or fun apps on your phone may seem like a good idea, but, over the long run, your phone’s battery will thank you for being judicious in the apps you allow on your cell phone. Having multiple apps will add to your background data and increase your battery drain. An easy way to cut down on these types of apps is to eliminate apps that serve the same purpose. Do you need two weather apps? Three news apps? You can save your battery and your time by preventing your phone from repeatedly showing you the same notifications from different sources.

While many phones will have fast charge options available now that let you charge your phone in a few minutes, you should avoid using them. The fast charge feature is okay if you’re genuinely in a rush, but don’t use it regularly.

The reason to use fast charge features sparingly comes down to the loss of storage capacity that occurs when a battery is charged. When lithium ions and lithium metals are shuttled between electrodes within lithium-ion batteries, they move slowly. When you charge at a slower rate, you let the shuttling process occur at its natural rate, fully completing their movements. By charging more slowly, you’ll increase the capacity of your battery’s charge.

Phones With the Best Battery Life

Phones With Removable or Replaceable Batteries

Phones with removable batteries might seem like a thing of the past, but some phones still include them. If you like to have multiple batteries so you can be sure you always have a charge, one of the following older phones might be perfect for you:

Many of these phones are no longer being manufactured, but there’s a good chance you can find one at brick and mortar retailers or online at The Whiz Cells eBay store.

How to Replace a Worn out Android or Apple iPhone Battery

If you don’t have a removable battery, your cell phone battery replacement is going to be more involved than simply turning off your phone, taking out an old battery and placing a new one in. As non-removable cell phone batteries are not meant to be removed by the user, it’s recommended to go with an authorized repair service center. If you do decide to do it yourself, there are a few tips to follow:

Android phones have unique features that play into their repair. So, you want to research the intricacies of your specific phone first. After researching the phone, follow these general tips if you’re set on repairing the phone yourself:

The basic tools you need include:

iPhone battery replacements are fairly inexpensive and are free with a warranty or AppleCare+. Due to the iPhone’s design, we recommend you send your phone in to be repaired rather than trying to do it yourself. You can find plenty of information on this process through Apple Support.

Sell Your Old Phone to The Whiz Cells

If your old phone is past any cell phone battery repair options and you’re ready to trade-in for a new one that has a better battery life, consider selling it to The Whiz Cells. With The Whiz Cells, you’ll receive fast cash and confidence that your old phone will be refurbished or recycled in a way that reduces e-waste.

After selling your phone, you can purchase a new one through The Whiz Cells. Shop the cell phones we have available today.

© 2021 The Whiz Cells. The Whiz Cells is a Registered Trademark, a division of TM Capital LLC.
Powered and Hosted by BIG | Sitemap | Privacy Policy